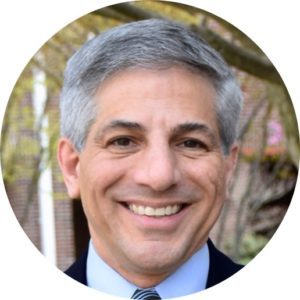 Jeffrey M. Osborn is provost and vice president for academic affairs at The College of New Jersey. Prior to assuming this role in July 2020, he served as dean of the TCNJ School of Science for 14 years. Dr. Osborn has also served as professor of biology at TCNJ since 2006.

Provost Osborn is an administrator-teacher-scholar, working in biological, interdisciplinary, and higher education areas. His primary scientific focus addresses questions about plant evolutionary biology, considering evolutionary questions about pollen development, character evolution, and pollination biology in seed plants. His higher education foci include the pedagogical/scholarly/institutional aspects of undergraduate research, leadership of organizational and cultural change, teacher-scholar role of faculty, faculty workload models, and the integration of high-impact educational practices into the curriculum. Dr. Osborn has received over $10.8 million in grant funding as a principal investigator/co-principal investigator. In addition to his own awards, he has helped lead his institutions in winning over $21 million in additional competitive grant support for mission-central efforts. He has led a number of institutional and multi-institutional programs to support the institutionalization of undergraduate research, scholarship, and creative activity, or URSCA, as well as the advancement of undergraduates and faculty who have been traditionally underserved by higher education. Through these efforts, Dr. Osborn has worked with over 400 colleges and universities across the U.S.

Dr. Osborn is a past-president of the Council on Undergraduate Research (CUR), a national organization of over 13,000 individual and 750 institutional members representing all disciplines and over 1,000 colleges and universities of all types. Dr. Osborn has served as a principal investigator on CUR’s National Science Foundation-funded national projects providing comprehensive support for faculty, institutions, state systems and consortia, as an associate editor for the American Journal of Botany, and as a member of the External Advisory Board of the State of Oklahoma’s National Institutes of Health (NIH) IDeA Network of Biomedical Research Excellence Program. Osborn has served as program director and member of the Executive Board of the Botanical Society of America, where he coordinated and planned the scientific and educational program at the annual “Botany” conference, which draws over 1,000 registrants each year.  He has also served on the peer review committees for the Council for International Exchange of Scholars–Fulbright Senior Scholar Program and for the American Association for the Advancement of Science (AAAS)–Research Competitiveness Program.